Rodney Davis is currently serving his fifth term in Congress serving the 13th District of Illinois, a 14-county district covering both urban and rural areas of Central and Southwestern Illinois.

During his time in Congress, Rodney has established himself as an effective lawmaker who is able to govern and work with his colleagues on both sides of the aisle to pass legislation, even in a divided government. He has fought to advocate for the priorities of the 13th District and Illinois in Washington. Since coming to Congress, Rodney has served on both the Transportation and Infrastructure Committee and the Committee on Agriculture, which has allowed Rodney to be a leader on issues essential to commerce in Illinois.

Rodney presently serves in several leadership positions in Congress, including Ranking Member of the Committee on House Administration, Ranking Member of the House Transportation and Infrastructure Subcommittee on Highways and Transit, and Deputy Whip for Republican Whip Steve Scalise. Rodney previously served as the Chairman of the House Agriculture Subcommittee on Biotechnology, Horticulture, and Research at the House Agriculture Committee in the 115th Congress.

Rodney serves as the Ranking Member of the Committee on House Administration, which has oversight of day-to-day operations of the House of Representatives and federal election law. Rodney has used his position to promote transparency and security reforms to the Capitol Police Board and to advocate for the full re-opening of the House of Representatives to the public. Rodney believes election administration is best handled at the state and local level. That’s why he’s led the charge against the majority’s so-called “For the People Act” and advocated for election reforms to promote election integrity and confidence in our elections.

Rodney serves on the House Committee on Transportation and Infrastructure (T&I), where he is the Ranking Member of the Subcommittee on Highways and Transit. On T&I, Rodney has advocated for a return to normal, long-term reauthorizations for our transportation systems, including highway, aviation, rail, and waterways, and has played an integral role in securing new investments in those transportation systems. Reauthorizations Rodney has worked on include the 2014, 2016, 2018, 2020, and 2022 Water Resources Development Acts (WRDA), the 2015 Surface Reauthorization bill (FAST Act), and the 2018 FAA Reauthorization. Additionally, Rodney served on the conference committee for the 2014 WRDA. Rodney has successfully advocated for regulatory reforms to speed up federal highway projects and save taxpayer dollars, including through his One Federal Decision Act, which was signed into law through the Infrastructure Investment and Jobs Act. Rodney also passed the Small Community Transit Improvement Act to help secure additional federal transit dollars for downstate Illinois communities that rely on transit systems.

Rodney serves as a senior member of the House Agriculture Committee, where he has worked to support the American farmer by strengthening critical farm programs and increasing federal support for agricultural research. Rodney helped write the previous two farm bills, serving on the 2014 and 2018 Farm Bill conference committees. In the 2014 Farm Bill, Rodney was a leading voice for allowing farmers to choose between the Agriculture Risk Coverage (ARC) and Price Loss Coverage (PLC) risk management programs. In the 2018 Farm Bill, Rodney successfully included language to ensure federal Ag research dollars are directed to programs that positively impact producers. Rodney has consistently supported increased federal Ag research funding, which has increased by $109 million since 2014.

Rodney has worked to promote America’s national security and support the men and women America’s armed forces through the National Defense Authorization Act (NDAA). Rodney served on the conference committee for the 2021 NDAA. Rodney has worked to promote Scott Air Force Base, which is a vital part of the Metro East community and economy. Rodney successfully included language in the House version of the 2023 NDAA to protect the C-40C aircraft and the 932nd Airlift Wing flying mission at Scott AFB. Rodney successfully passed his Counting All Military Votes Act, which ensures all active-duty and deployed military personnel who wish to vote have their ballots mailed to their clerks in a timely manner. Rodney also successfully passed the Fallen Heroes Family Travel Act, which reimburses travel costs for families of servicemembers who lose their lives in the line of duty who are traveling to obtain the remains of their loved ones.

Rodney wrote and passed the Hire More Heroes Act, which helps small businesses hire veterans by amending Obamacare. His bill overwhelmingly passed the House with more than 400 supporting votes and was signed into law in July 2015. This, along with his bill, the EACH Act, are some of the few pieces of legislation signed into law to amend Obamacare.

In 2018, Rodney successfully passed legislation reforming the Federal Emergency Management Agency’s (FEMA) disaster declaration process to help level the playing field for rural communities in Illinois and across the country who are seeking federal aid for disasters. His legislation, which was signed into law in October 2018, requires FEMA to place greater consideration on the localized impact of a natural disaster.

Rodney successfully passed into law his Employer Participation in Repayment Act, which creates a unique public-private partnership to tackle the student debt crisis. Rodney’s law allows employers to make tax-free student loan payments on behalf of their employees, up to $5,250 per year, through 2025. This program works identical to what is already permitted for tuition assistance benefits under Section 127 of the Internal Revenue Code.

Rodney has worked to lower the cost of health care. He’s worked with lawmakers in both parties to increase funding for hospitals, including rural critical access hospitals, protect nurses from furloughs, lower the cost of insurance premiums and prescription drugs, reduce co-pays and out-of-pocket costs, protect pharmaceutical research, and more. Rodney has also worked to protect insurance coverage for individuals with pre-existing conditions. This fight is personal to Rodney. His wife Shannon is a nurse and a 23-year cancer survivor. She has a genetic form of colon cancer that will be with her for the rest of her life, and it will affect their three children too.

Drawing inspiration from his wife’s battle with cancer, Rodney has worked with lawmakers from both parties to advance policies aimed at preventing cancer. He has advocated for increased federal funding into cancer research and expanding access to cancer treatment and prevention as well. Rodney passed his bipartisan Removing Barriers to Colorectal Cancer Screening Act, which was signed into law in 2020, to decrease colorectal cancer deaths by increasing cancer screenings.

Rodney has successfully passed legislation to recognize and preserve our history, including legislation to incorporate the Springfield Race Riot Site into the National Park System and to celebrate the Route 66 Centennial.

On June 14, 2017, Rodney was one of several Republicans who were practicing for the Congressional Baseball Game for Charity at a baseball field in Alexandria, Virginia when a gunman opened fire, attempting to assassinate Republican members of Congress. Congressman Steve Scalise and several others were injured, but due to the heroic actions of Capitol Police Officers David Bailey and Crystal Griner and the Alexandria Police Department, there were no fatalities that day other than the shooter. Following the shooting, Rodney has made it his mission to promote more civility in politics.

As a former Congressional staffer and current member of Congress, Rodney has worked to make Congress work and function more effectively through the Select Committee on the Modernization of Congress. The Modernization Committee has proposed and implemented dozens of reforms, including ones designed to promote transparency, foster bipartisanship, and improve Congressional staff retention and recruitment.

Prior to being elected to Congress, Rodney served as Projects Director for Congressman John Shimkus for 16 years, helping Illinois citizens and communities cut through government red tape and secure federal funding.

Rodney resides in Taylorville with his wife, Shannon, daughter, Toryn, and twin sons, Clark and Griffin. 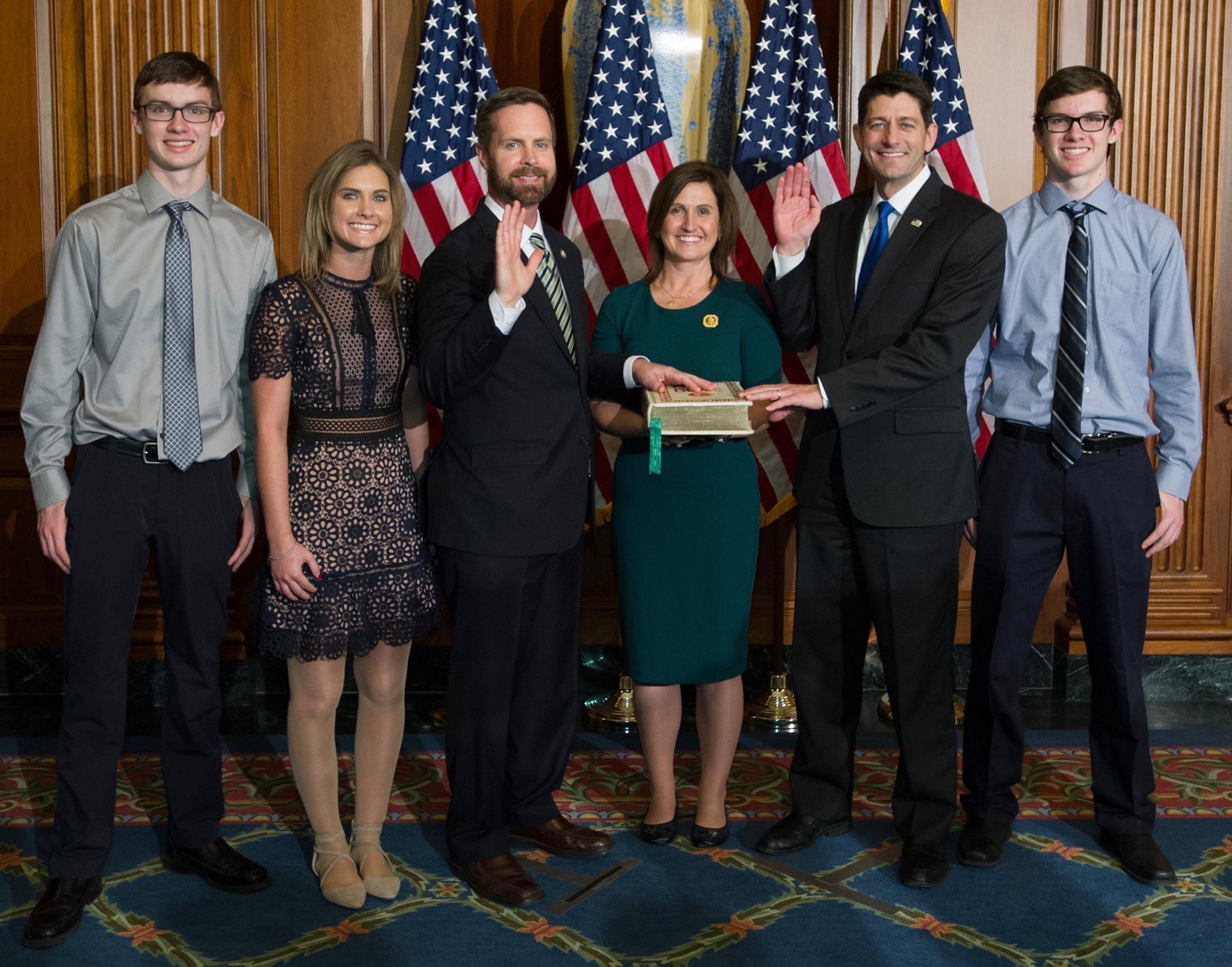 Rodney serves as Ranking Member of the Committee on House Administration.